I'm working on an iOS app

I’m working on an iOS app and I’m getting so close to releasing the 1.0. I was looking at App Store Connect and noticed that I needed screenshots and I remembered that Fastlane has the ability to automate screenshot creation.

Pretty cool I think. So I go through the process of setting up and starting to work on the UI Tests that need to run in order to trigger the screens I want to show and then it hits me.

The app I’m working on uses MusicKit and unfortunately the Xcode Simulators aren’t able to really do anything with MusicKit i.e. they can’t search or play music which is kind of a big deal. This hadn’t been much an issue during development because I could just run the app on my phone.

From what I can tell I will not be able to use Fastlane to automate this screenshot creation because it relies on using simulators for running the UI Tests that would then capture screenshots. What a bummer (though I sure hope I’m wrong!).

Fortunately I found another resource from Benoit Pasquier that might make it possible for me to use UI Tests to automate screenshots to some degree. It won’t be quite as extensive, but my wife has a regular sized iPhone and I have a big one so at least I’ll have two sets of screenshots. No luck on the iPhone SE size. Hopefully that isn’t a dealbreaker, but we’ll see. This is all very new to me.

This is my first time writing (re: rambling) about this app and if you’d like to hear more or be invited to the TestFlight, feel free to comment on this post or shoot me an email at nick_kaczmarek@icloud.com.

If you use GPG and Xcode you may have run into this error. 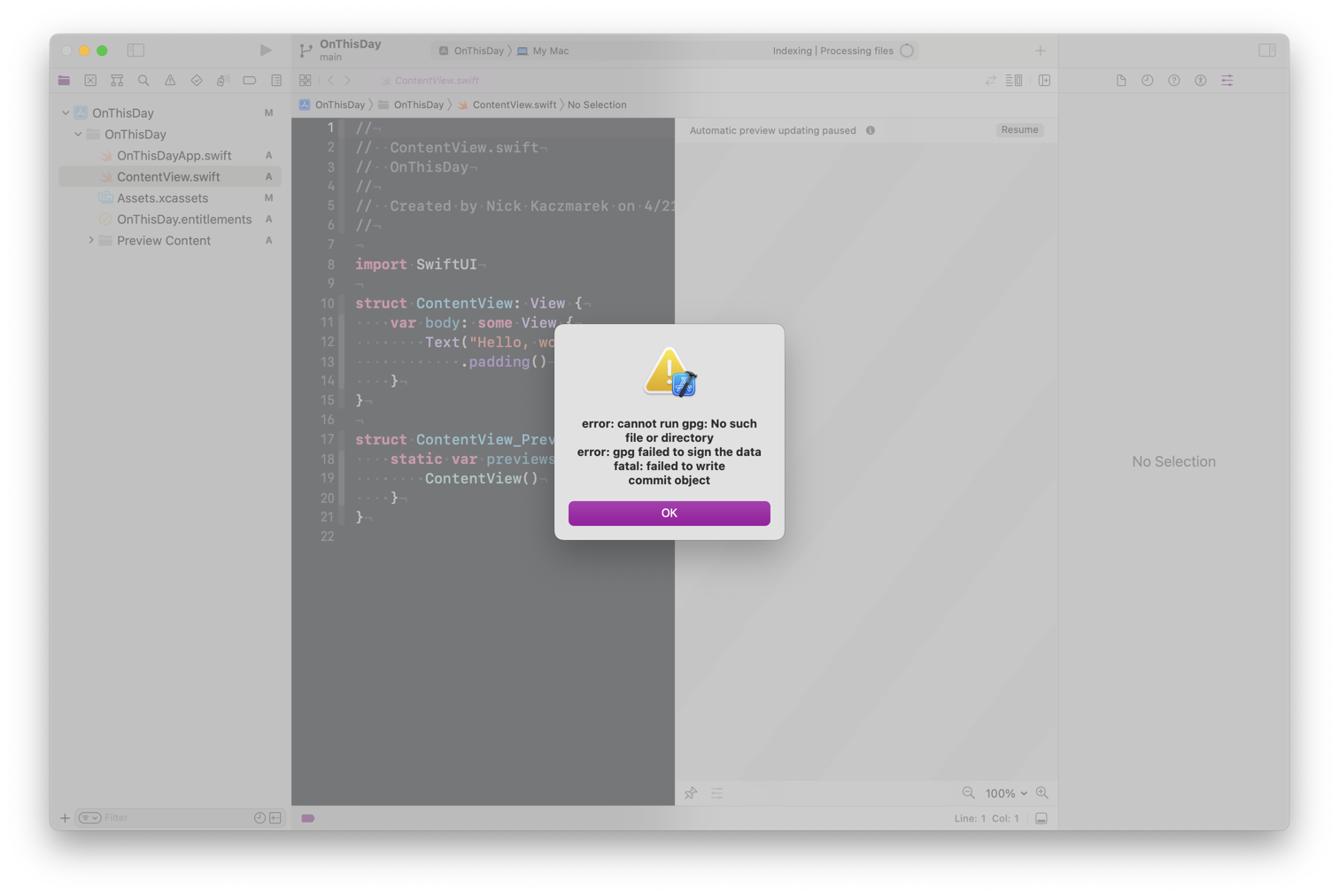 From what I can tell if doesn’t really matter and you can still commit just fine (in the terminal if you want to use GPG), but it was annoying me. So I went spelunking and found this post on GitHub. In the post the author shares a git config command we can use to solve the issue.

Run this in your terminal and then when you create a project in Xcode, the warning should go away. Expect that you’ll need to enter your GPG password (if you have one) on the next project creation.

For reference, here is the gist I followed to set up my GPG key for macOS.

TIL: Xcode has the ability to split editors vertically

I have used VSCode for much of my career (for historical .NETy reasons) and really like its ability to split editor panes. Particularly the ability to split horizontally and vertically. I was bummed when moving to Xcode and found I wasn’t able to do this…Until now!

How to do split editor vertically in Xcode

This is very exciting, but I look forward to when other editors support the VSCode feature of dragging those pane corners more than one direction at a time. (VSCode allows you to grab at the corner of two panes and drag horizontally, vertically, or diagonally all in one motion while Xcode and Nova only allow one direction per click).